How to Increase the Water Pressure in Your Shower

Everybody enjoys a hot shower on a cold day, but what happens when the water pressure is so low you feel like you're not taking a shower at all? There's a variety of reasons you can experience low water pressure in your shower, and there's a few things you can try to get the water flowing again.

This article will cover what causes a shower to have low water pressure and how to fix the problem. Of course, you can always hire a professional to troubleshoot the situation, but there's a few basic things to check before calling for help.

You've probably seen water tower tanks at some point, they are huge tanks which hold ten's of thousands of gallons of water. The tank are hoisted above the ground in order to use gravity to produce water pressure. There's a possibility that the water in your shower was actually stored in one of these tanks at some point.

As the water makes it's way to the water main, pressure develops. Water pumps are frequently used to increase and maintain the pressure. As the water enters your home and you turn on your shower, the water flows through the shower head. If everything worked as it should, the water will be properly pressurized and your shower will have good water pressure.

You can check out a more extensive article which will cover in more depth many of these causes. This article will primarily focus on low water pressure in your shower, but it is important to note that many of the causes overlap. 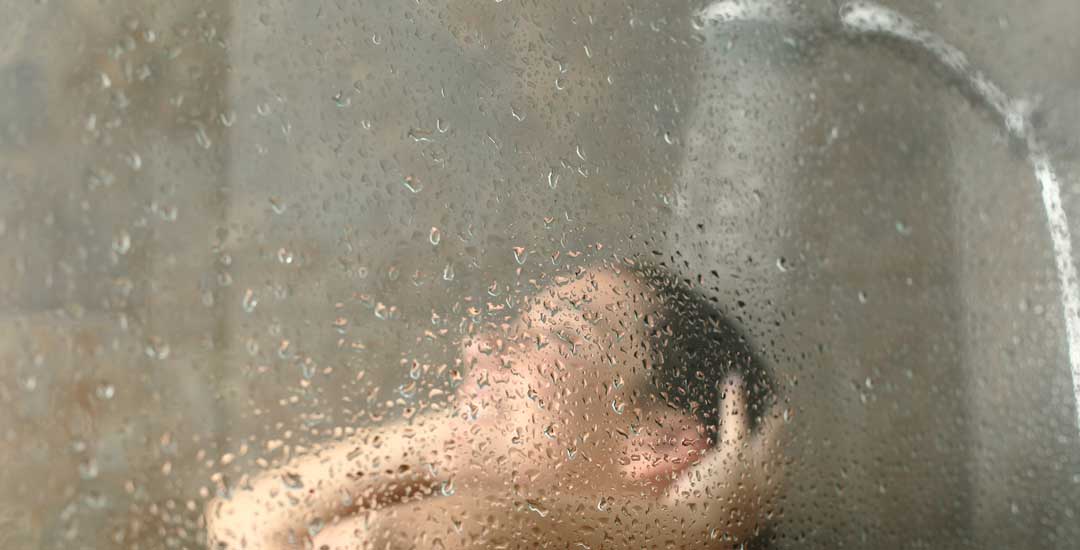 How to Increase the Water Pressure in a Shower

When you're experiencing low water pressure in your shower, the problem may or may not be directly related to your shower. Some of the "fixes" are simple enough to attempt on your own, while others may require professional assistance.

This is probably the most common reason people experience low water pressure in their showers. Fortunately, it's also one of the easiest to fix. Shower heads collect sediment, limescale, and mineral deposits, and over time, the small pinholes become blocked and prevent water from flowing. As a result, the water pressure they're able to provide is significantly less.

Cleaning a shower head is a fairly straight forward process and something you should be able to do yourself. Here's how:

Some times a shower head is so clogged that the best choice is to replace it with a new one. Shower heads aren't very expensive and they're easy to install. If you have a few basic tools around the house and some teflon tape, you should be able to install it without assistance. 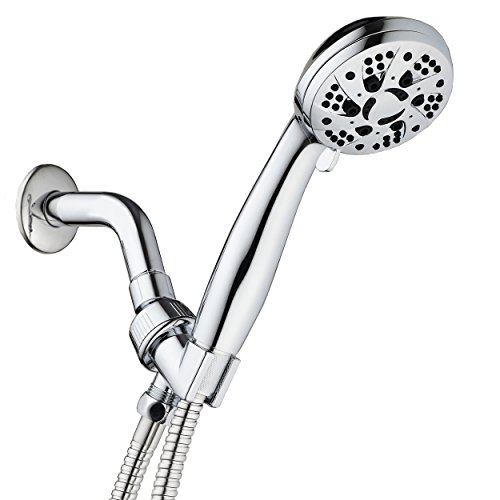 If you have a handheld shower head then it'll have a long line that could become twisted or kinked. When this happens the water flow is restricted and ultimately the amount of water pressure the shower head is able to deliver is reduced.

This situation can usually be fixed by straightening the hose and making sure it's not twisted. In some cases, you may need to replace the hose, although many people choose to purchase a new shower head rather instead.

It's not uncommon for these valves to be partially open, especially if you just moved into a new home or had plumbing work done. This video will help you locate your main water shutoff and show you how to turn the water on and off:

Frequently the incoming water pressure is higher than the household plumbing and appliances are designed to handle. A pressure reducing valve is installed to lower the pressure to an acceptable level.

One reason the reducing valve may need to be adjusted is because there's a higher demand for water. As more houses are built, they're also hooked to the water main, and with each new demand for water, the pressure slightly lowers. Another common issue could be that the valve is failing and needs to be replaced.

Whether the water pressure reducing valve is failing or simply needs to be adjusted we highly recommend contacting a professional plumber. Although, you can technically do this fix yourself, it's best to leave it to the professionals. They'll be able to diagnose the problem and make any adjustments or repairs as needed.

Leaks are one of the most common causes of low water pressure. It's a good idea to make sure that your home doesn't have any plumbing leaks before you invest too much money in fixing water pressure issues.

As best you can, check for leaks in your home's plumbing. You may notice a puddle of water, or water damage on a wall, or you may even notice that your water bill has been higher than normal. Contacting a plumber to take a closer look could prevent a huge and expensive water damage issue if you suspect that there's a small leak.

It's also possible that there's a leak in your water main. If the leak isn't obvious, you can check the ground for signs of water. In many areas homeowners are responsible for the water main pipe from the property line to their home, and in other areas it depends on which side of the water meter the break occurs. Either way, a water main break needs to be fixed, the only question is who will pay.

If you're only having low water pressure with hot water, then there's a good chance that the issue is with your water heater. The first thing to check is the shut off valve. Most water heaters have a dial or lever on the incoming water line. This valve may be closed or partially closed which will definitely lower your hot water pressure.

Or it could also be that when the water heater was installed an apex ball valve was used on the incoming water line. This can cause a flow restriction because the size of the pipe is reduced due to the type of valve used. When installing the water heater shut off valve, it's always best to use a full-sized ball valve. This video explains the problem and takes you through some troubleshooting:

Sometimes there's nothing wrong at all, and the fix is as easy as changing the time you take your shower. If you're typically showering in the early morning or in the evening it could be that the low water pressure you're experiencing is because this is a peak period in your neighborhood.

The early morning and evening is considered to be a peak period of water use, and if you're able to take your shower in the afternoon, when the peak usage has ended, you may find your water pressure to be back to normal.

You can test your water pressure (see below) during peak periods and low usage periods to compare the difference and see if this is the problem. Contacting your water company will at least alert them to the situation, but whether or not they take action is another thing altogether.

If the reading is between 45 to 55 psi it doesn't necessarily mean that you're imagining the problem. But rather, it could be a sign that your water pressure problem is coming from inside the house.

In 1992 the US government lowered the flow rate of shower heads to no more than 2.5 GPM (gallons per minute). GPM is how flow rate is measured, and its simply the amount of gallons of water that can flow from your shower head in a minute.

Ten gallons may not seem like much at first glance, but consider if you take a shower 4 times a week, now you've saved 40-gallons of water. And using this example, over the course of a year you would take 208 showers, which means you would save 2,080-gallons of water!

In fact, according to the EPA, showering can account for as much as 17% of residential indoor water usage. As we've just outlined, by simply reducing the flow rate on a shower head, there's a significant opportunity for both water and energy savings.

Today, the EPA encourages homeowners to purchase shower heads that meet a 2.0 GPM flow rate and earn the WaterSense label. These shower heads could save even more water and energy.

Finding the balance between energy savings and good water flow doesn't need to feel as though you're being deprived. If your shower head is not clogged and is in good working order, these low flow options are an excellent choice. In fact, many are designed so that you can't even tell they're designed to save water.

How to Test Your Flow Rate

If you're curious what the flow rate is of your shower, you can do this simple test which is outlined in the video.

Shower heads use a flow restrictor to reduce the flow of water, and most modern shower heads have one. A flow restrictor is a plastic disk that's slightly larger than a dime, and although we do not recommend it, they can be removed to increase the shower's water pressure.

Over time, manufacturers have made huge improvements to the flow of water through shower heads while still saving water and energy. We highly recommend upgrading to a high-pressure shower head rather than removing the flow restrictor. But if you're determined that it's what you want to do, here's how:

Is There a Shower Head That Increases Water Pressure?

The low water pressure issues in your shower may simply be caused by the quality of your shower head. Outdated shower heads simply can't match the efficiency of the newer models available today.

They work to minimize flow restriction and optimize shower force. If you've tried fixing your water pressure, but just can't get it where you want it to be, then upgrading to a high-pressure shower head may be an excellent solution. 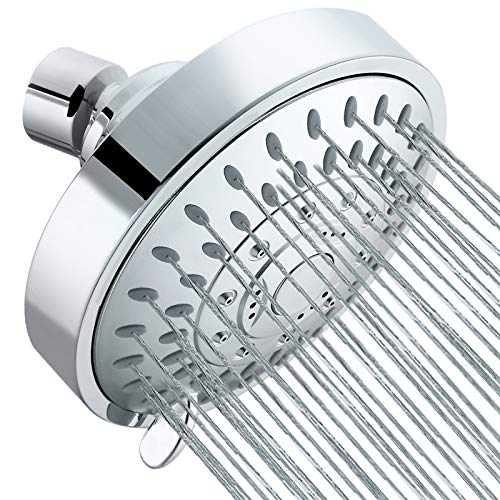 Do I Need to Call a Plumber?

You may or may not need to call a plumber depending on the source of your water pressure problems. For example, you should be able to clean your shower head yourself, and most people are comfortable opening up their home's water valve and water heater inlet valve even if they haven't done it before.

However, many problems such as leaks and blockages in your home's plumbing can be much more difficult to diagnose and repair. If you suspect that's what's causing your shower's water pressure to dip, then calling a plumber is a smart idea.