PVC vs. CPVC: What’s Best Choice for Your Water Heater

One of the main benefits of purchasing a condensing tankless water heater is the ability to use PVC pipe to vent exhaust gases. But would it be better to use CPVC pipe instead? And can you use CPVC or PVC on a tank-style water heater?

PVC and CPVC piping have been around for years, but unless you're a plumbing professional, you may think they are exactly the same. In this article we'll take a close look and compare PVC vs. CPVC piping to help you determine which is the preferred material for your new water heater. Plus, you'll learn everything you need to know about these handy piping options.

What is PVC Piping?

Polyvinyl chloride, or more commonly known as PVC, was actually discovered at the end of the 19th century. But because is was so difficult to work with, it was set aside. However, in the 1920s, BFGoodrich "rediscovered" polyvinyl chloride in their attempt to develop a synthetic rubber.

But it wasn't until World War II that the PVC material began being used extensively. The US military used PVC to insulate the wiring on their ships instead of the costly, and in short supply, rubber insulation. Today, it's one of the most widely used plastics in existence, and has frequently been used for plumbing since the 1960s.

Here are some of the benefits of PVC pipes:

Low Cost - PVC pipes are inexpensive to purchase and install. And because they have a low breakage rate and a long service life they are an excellent choice for your pocket book.

Long Service Life - PVC piping can consistently reach a service life of over 50-years, and some studies show they will still be operational over 100-years. In other words, if you install PVC piping, it'll almost certainly outlive the appliance.

Easy Installation - PVC piping is very easy to install. No wielding or metal work is required. Simply cut to size and cement in place.

Rust and Corrosion Resistant - Since there are no metals used with PVC pipes they are unable to rust or corrode. In fact, you might be surprised to learn that PVC is actually made from natural gas and sodium chloride (otherwise known as rock salt!)

PVC piping does have a few disadvantages:

Not Suitable for Hot Water - PVC pipes are not capable of handling hot water.

Not Environmentally Friendly - Not environmentally friendly. This can be looked at from both angles. First, since PVC pipes have such a long service life, they likely won't need to be replaced for, at least, the life of your water heater. However, when they are replaced, they do not breakdown and are difficult to recycle or find proper disposal.

What is CPVC Piping?

Chlorinated poly vinyl chloride piping (CPVC) is basically a subtype of PVC. It's main advantage over PVC is that it can be used for both hot and cold potable water applications. In addition, it is resistant to many household chemicals.

CPVC was first used in 1959 for potable plumbing, and since 1985 it has been extensively used in fire sprinkler systems.

The "C" in CPVC stands for chlorinated. In the manufacturing process an additional chemical reaction takes place to ensure that the CPVC material has more chlorine than the standard PVC material. Although the amount of chlorine varies by manufacturer, it could be as high as 74%.

CPVC vs. PVC: How Do They Differ?

Price - As a general rule, you'll pay more for CPVC because it requires additional manufacturing.

Color - Both types of pipes look the same in shape and size, but their color varies. Although not always the case, you'll typically find PVC pipes in either white, dark gray, or clear colors, and CPVC in cream or gray.

Sizing - Unfortunately, this difference could become a huge headache. PVC is sized using the Iron Pipe Size (IPS) standard. But CPVC can be sized in two manners. It could use the IPS standard, or the Copper Tubing Size (CTS) standards. So if you choose CPVC piping, you'll want to pay close attention to which method is used since the two sizing metrics are completely different.

Chemical Make-up - As we covered above, the "C" in CPVC indicates a different chemical make up from PVC piping. But the chemical difference impacts more than how the pipes perform to hot temperatures. Assuming that the PVC and CPVC pipes are the same size, they can not be joined together with standard PVC cement. Should you want to join the two together, you'll need to use a solvent cement and primer strong enough to bond CPVC pipes.

Resistance to Temperature - For residential water applications, PVC is safe for use at temperatures below 140°F. CPVC can be used with temperatures up to 200°F safely. This is really the key difference between the two, and the deciding factor on which piping you choose.

When to Use CPVC and PVC on a Water Heater

CPVC and PVC pipes are an excellent option when plumbing your household, but can you use them for your water heater?

CPVC piping is rated for hot water heater installation, we highly recommend talking with a professional plumber before replacing the water inlet and outlet lines with CPVC or PVC. Although, it may be technically possible, if done correctly, it also could be a code violation in your area.

In addition, working with copper water heater connectors, like these from Amazon, makes installing and replacing so much easier than working with CPVC piping.

With that said, a tank-style water heater requires a discharge line that attaches to the temperature and pressure release valve. These lines are often made of copper, but this is an excellent use for schedule 40 CPVC piping. You should never use PVC pipe for the discharge line.

The temperature and pressure release valve is designed to open when the internal water temperature reaches about 210°F. If PVC pipe is used, when the extremely hot water (under force) hits the PVC pipe it will cause damage to the glue weld, and deform the pipe. Always use CPVC or copper for the discharge line.

Since the exhaust from a condensing tankless water heater is cool, schedule 40 PVC venting is more than capable of handling the temperature of the exhaust.

We've learned that the fundamental difference between PVC and CPVC pipe is the temperature they are rated to handle, but each also has different "schedule" variations. The two most common are schedule 40 and schedule 80. In a nut shell, this refers to the amount of pressure they are designed to handle.

Although, not always accurate, PVC and CPVC pipe can often be identified by color. Schedule 40 PVC is typically white, and schedule 80, dark gray. CPVC schedule 40 pipe is often cream colored, and schedule 80, light gray. Since the colors are not always used in this manner, you should take care to check the pipe description printed on the pipe itself to ensure you've selected the right one.

Here are the two main differences between PVC and CPVC schedule 40 and 80 pipes:

Wall Thickness - Wall thickness is the biggest difference between the two. You'll most often see schedule 40 PVC pipe at your local home improvement store. It's rigid, strong, and capable handling pressure. It's also best suited for cold water systems, drainage, and irrigation, but if you need a pipe that can handle higher pressurization, then schedule 80 is the way to go.

Schedule 80 PVC pipe has a thicker wall, which means it's stronger and capable of handling a higher PSI (pounds per square inch), and is more suitable for industrial applications and heavy commercial settings.

One interesting point is that PVC pipes do not have a one-size-fits-all PSI rating. This is because the pipe size determines the amount of pressure it's rated to handle. As an example, a 12-inch schedule 40 PVC pipe is designed to operate at 79 PSI; but if it is only 4-inches in length, it can operate at 133 PSI. The same is true with schedule 80 PVC pipe. A 12-inch has an operating PSI of 137, and 4-inches is 194 PSI.

Both schedule 40 and 80 have the same outside diameter, but schedule 80 PVC pipes have a smaller inside area due to the thicker wall. So it's important to note that the flow will be less restricted in a schedule 40 pipe.

Price - Because a schedule 80 PVC pipe has a heavier wall, it's fair to assume that it will also be more expensive. There are two primary reasons for the added cost. First, there's more PVC material used to manufacture the pipe; and since it's heavier, it'll cost more in shipping and handling.

One of the advantages of working with both PVC and CPVC pipes is the availability of fittings. Pipe fittings allow two pieces of straight pipe to be attached together to change the direction of the pipe around a bend or perform other necessary plumbing adjustments to match the exact specifications of the project. Both types of piping are very easy to work with and have a wide range of pipe fittings available.

You can not use PVC fittings on CPVC pipes (and vise versa), however, you can typically find the same fittings in each pipe. This is especially true for the more common fittings.

Elbows can be found in a variety of bends. The most common are 90° and 45°; and tees, crosses, caps and couplings are also, for the most part, readily available from your hardware store or Amazon in both PVC and CPVC.  Below are a few examples of each, but you should be able to find them in both pipe types. 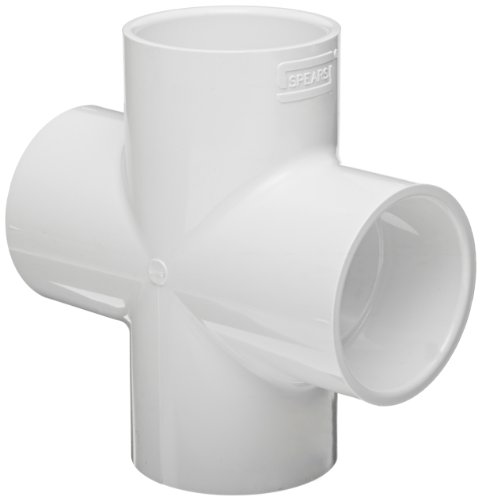 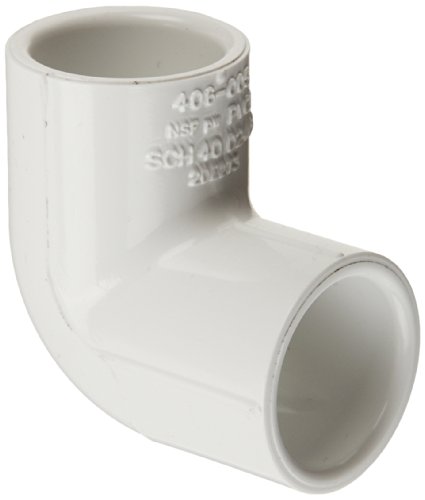 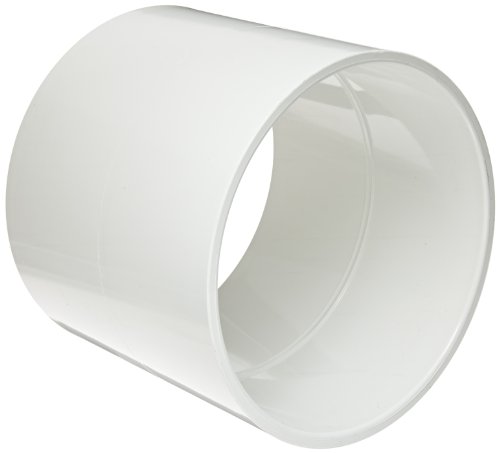 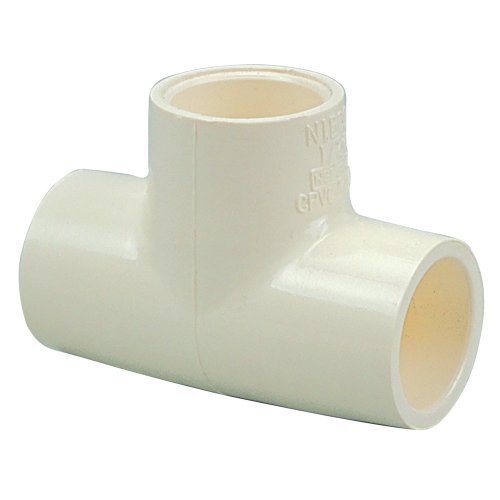 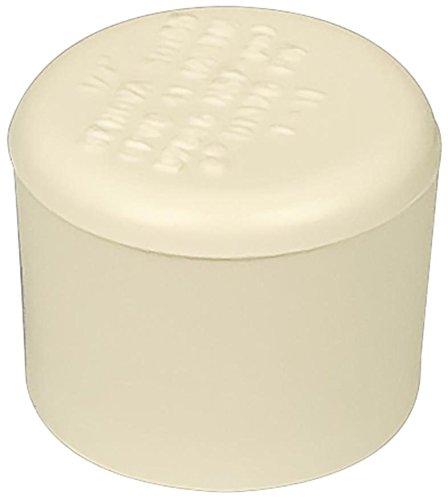 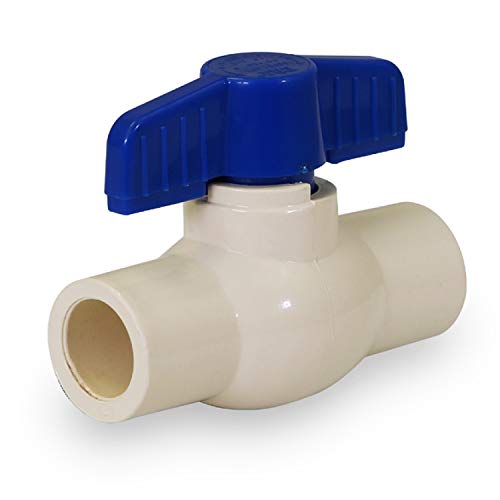 How to Glue PVC Fittings in Place

One of the advantages of using PVC pipes is the ease of attaching fittings. Here's how to securely glue PVC fittings in place:

How to Glue CPVC Pipe Fittings in Place

CPVC pipes are glued in place the same way as PVC. There are some primers (cleaner) and cements that can be used on both CPVC and PVC pipes, but always check the type you purchase to make sure that its designed for CPVC pipes. Taking the time to properly glue the pipes and fittings will prevent leakage.